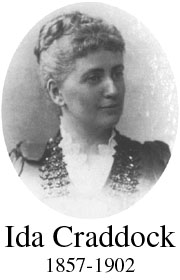 REVIEWED BY
ALEISTER CROWLEY
THE EQUINOX Vol. III No. 1
(Page 280)

Heavenly Bridegrooms. By Theodore Schroeder and Ida Craddock. Reprinted from the Alienist and Neurologist.

This book has been left entirely unedited by Mr. Theodore Schroeder, with the exception of a very brief explanatory note. I may say that it is one of the most remarkable human documents ever produced, and it should certainly find a regular publisher in book form. The authoress of the MS. claims that she was the wife of an angel. She expounds at the greatest length the philosophy connected with this thesis. Her learning is enormous. She finds traces of similar beliefs in every country in the world, and (having a similar experience of her own) she can hardly be blamed for arguing that one thing confirms the other. Mr. Schroeder is quite logical in calling her paper An Unintentional Contribution to the Erotogenic Interpretation of Religion, but commits the errors of petitio principii and non distributio medii with the most exquisite nonchalance. Only a lawyer could be so shameless. He begs the question with regard to this particular case, assuming that her relation with the angel was pure hallucination, of which he has no evidence whatsoever. He argues that, since one person both loves and is religious, religion is nothing but a morbid manifestation of the sexual instinct. One does not have even to disagree with him to see how worthless is his reasoning. As a matter of fact, I do half agree with him in my calmer moments in a general way, but the conclusion can be carried a step further. When you have proved that God is merely a name for the sex instinct, it appears to me not far to the perception that the sex instinct is God.

This particular MS. is absolutely sane in every line. The fact that the woman committed suicide twelve or fifteen years afterwards is no more against the sanity of the MS. than the suicide of Socrates proves that the Republic is merely the lucubration of a lunatic. I am very far from agreeing with all that this most talented woman sets forth in her paper, but she certainly obtained initiated knowledge of extraordinary depth. She seems to have had access to certain most concealed sanctuaries. I should personally be inclined to attribute her suicide rather to the vengeance of the guardians of those palaces than to any more obvious cause. She has put down statements in plain English which are positively staggering. This book is of incalculable value to every student of occult matters. No Magick library is complete without it.